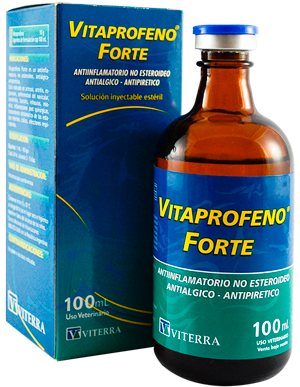 Introduction
Inflammatory processes can be specific or non-specific like those which are commonly observed in sport horses after exertion. These non-specific post- exertion inflammatory processes basically settle in the large muscular masses (myositis) and/or in the ligaments and tendons of the legs (desmitis and tendinitis respectively). These processes show themselves, in the majority of cases, by just an increase in the sensitivity to pain and with a blood biochemistry which is characterized by an increase in plasmatic fibrinogen (the protein in the acute phase of inflammation) and the muscular enzymes, creatine kinase (CK), aminotransaminase asparatate (AST) and lactate dehyro-genase (LDH). The increase in the plasmatic concentration of these enzymes can occur as a consequence of a muscular injury or as a consequence of an increase in the permeability of the membrane at muscular level because of the lowering of the pH. In the latter case, the increase is transitory.

Objective
To assess the anti-inflammatory effect of Vitaprofeno in horses which undertook a test of maximum effort.

Materials and Methods
Animals: Four horses were used, three fillies and one colt between 2 and 3 years old, three being Arabs and one Anglo-Arab. All the horses undertook the same training programme, were stabled and received the same food based on alfalfa hay (4kgs per day) and oats (3kgs per day).

Exercise Test: This started off with a pre-warming phase of 1min at 1.7m/s and at trotting speed 4min. at 4m/s without a slope. Then the test itself began with successive stages increasing by 1 min. with 6% slope from 5m/s until fatigue was reached (the moment when the horse can no longer maintain the stipulated race speed). Lastly the recuperation stage which was made up of 4 min. of trotting at 4m/s and 1 min. at 1.7m/s, again without a slope.

Equipment
So as to carry out the exertion test an ergometric treadmill Kagra brand Mustang 2200 model was used. The enzymograms (CK and LDH) and the measurement of the plasmatic fibrinogen were done with an automatic analyzer Aeroset Abbot brand.

Experiment Design
A Latin square was used. The horses were divided into 2 groups of 2 animals and they were tested as controls and as treated animals with a 10-day difference between each test. The administering of Vitaprofeno in the treated group was done 30 min. post-test. The blood samples were obtained through vein puncture in the jugular vein at 8 a.m. (basal sample) and at 6, 12, 24 and 48 hrs post-exercise test. 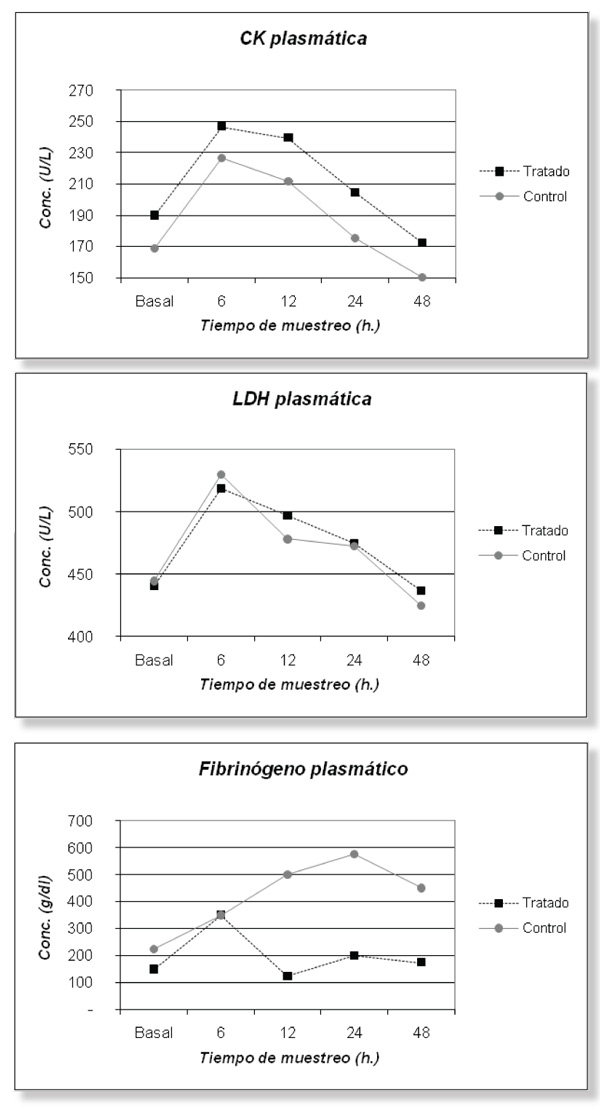 The LDH, the other enzyme used as an indicator of muscle injury, showed a behaviour similar to that observed with the CK. That is to say, the maximum concentration in both groups was observed after 6 hrs, to then continue decreasing to basal concentration after 48hrs. This enzyme is characterized by its high molecular weight, in being the indicator of muscular injury when the concentration maintains a higher level after the first 48hrs post-exertion. Therefore, if, indeed, there is an increase 6hrs post-test, the concentration post-48hrs shows, the same as that shown by the CK within the 24hrs post- test, the absence of muscular injury.

The plasmatic fibrinogen, which is the protein which indicates acute inflammation, shows a different behaviour from 6hrs post-test onwards. That is to say, there is an increase post-6hrs in both groups which goes above the reference values (up to 200g/dl) as a consequence of the maximum effect of Vitaprofeno not being felt in the treated group. And then, while the control group continued increasing the concentration, in the treated group, now under the effect of the drug, the concentration of fibrinogen was reduced to basal values (within the reference values) and maintained the same values throughout the sampling period. On the other hand, table 1 shows how the control group, with the administering of Vitaprofeno, has a high standard deviation resulting from the big individual variation to the exercise test, while the treated group, due to the effects of the anti-inflammatory medicine, show greater uniformity in the results.

To conclude, although the test exercise did not manage to create muscular injury, the transitory increase in the concentration of the enzymes CK and LDH due to the increase in the permeability of the membrane of the muscular cells as a consequence of the acidosis produced by the exercise, indeed produced an acute inflammatory non-specific process mitigated by the application of Vitaprofeno. 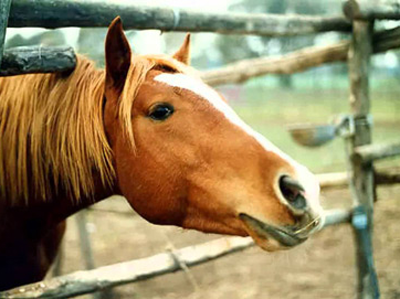 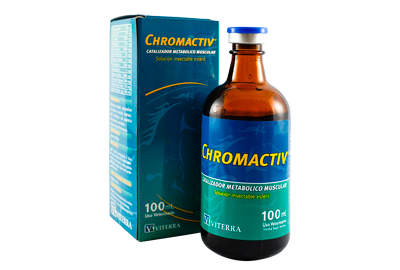 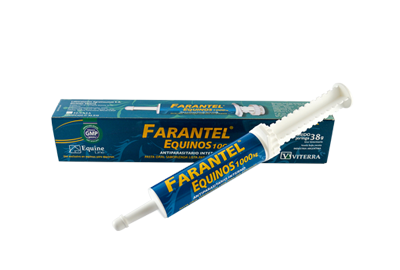 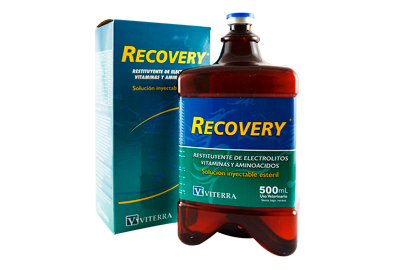 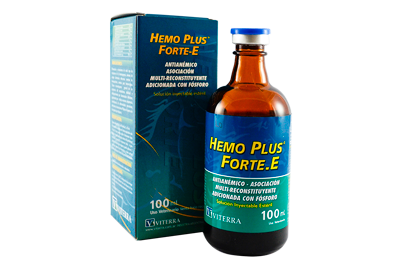 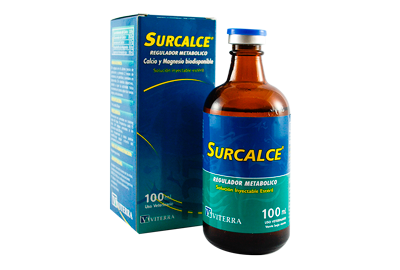